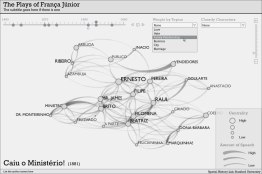 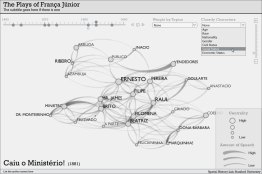 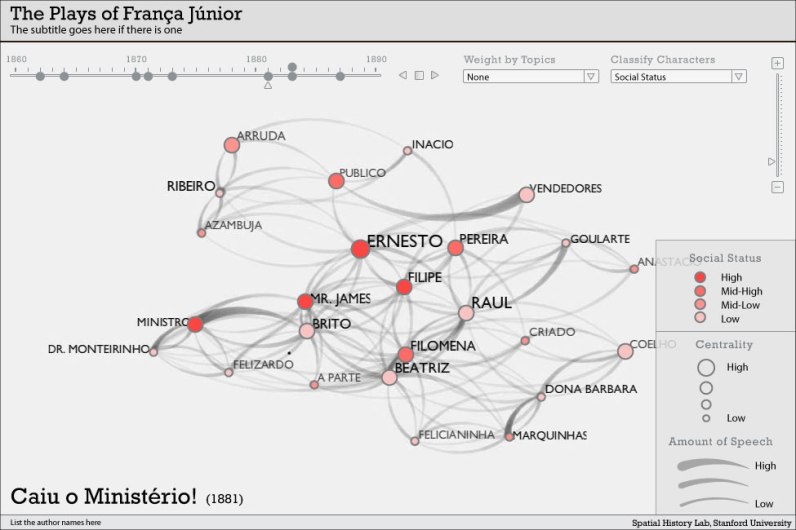 The Plays of França Júnior is an interactive visualization showing the social network formed by the characters in the plays of Brazilian nineteenth-century playwright França Júnior. This visualization is part of a larger research project on social networks in Brazilian literature led by Zephyr Frank at Stanford University’s Spatial History Project.

It is plain, then, that there is an intention to encapsulate a representative type of the Brazilian ruling class, through relationships peculiar to him . . .from another angle, this spectrum of characters represents a system of positions whose links with the political and economic organization of the country are palpable.
Roberto Schwarz, A Master on the Periphery of Capitalism, 46.

Taking our cue from Schwarz’s insight into the critical social information embedded in Memórias Póstumas this visualization provides a dynamic tool for the exploration of social positions in the plays of Joaquim José da França Júnior (1838-1890). Nine plays by França Júnior have been rendered as social network diagrams. Characters connect via spoken dialog. If one character speaks to another, a line semi-arc between the two is drawn. The greater the volume of speech (the character count in each interaction), the thicker the line. A social network algorithm places the character nodes in a system of positions along the lines suggested by Schwarz. Using the tools provided along with this visualization, it is possible to begin to explore questions regarding patterns of interaction in Brazilian society, particularly in the city of Rio de Janeiro, during the second half of the nineteenth century. Who could speak in the realistically imagined universe of França Júnior’s plays? How was speech differentiated by gender, age, race, class, and the social positions of speakers and listeners? In order to provide a systematic measure of the kinds of dialog exchanged among characters that can be compared within a given play but also across a larger corpus of plays, we employ a natural language algorithm to perform topic modeling on the dialog contained within the plays. Five primary topics were generated: Family, Feelings, Status, Money, and Politics. The proportion of speech for each character is measured for each topic in relation to each and every listener. In this way, one may examine not only the volume of dialog between characters, but also the topical content of speech.  Nota Bene: The measure of volume of speech is by character rather than by word.

I am a historian and associate professor of digital and Latin American history at North Carolina State University.

Take a look at some of my past and current work. Learn about me, my research, and my teaching. See my curriculum vitae.